I am getting all FIRED UP! The “A Day of Fire” cover is here, and my co-authors and I hope you’ll agree that it is hot, hot, HOT! 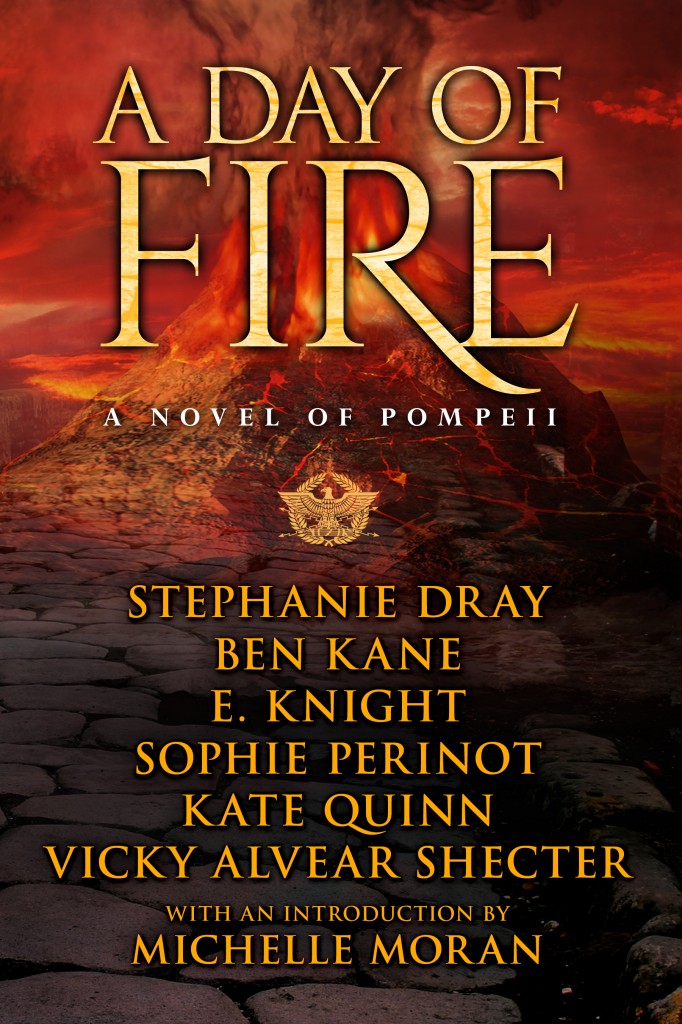 A Day of Fire: A Novel of Pompeii

A boy loses his innocence in Pompeii’s flourishing streets.

An heiress dreads her wedding day, not knowing it will be swallowed by fire.

An ex-legionary stakes his entire future on a gladiator bout destined never to be finished.

A crippled senator welcomes death, until a tomboy on horseback comes to his rescue.

A young mother faces an impossible choice for her unborn child as the ash falls.

A priestess and a whore seek redemption and resurrection as the town is buried.

Six authors–Stephanie Dray, Ben Kane, Eliza Knight, Kate Quinn, Vicky Alvear Shecter,and I–bring to life overlapping stories of patricians and slaves, warriors and politicians, villains and heroes who cross each others’ path during Pompeii’s fiery end. But who will escape, and who will be buried for eternity?

For those who don’t already know I wrote “The Heiress” for this fantastic  “novel in six parts.” In my story, spirited Aemilia is horrified by her betrothal to her father’s friend, Sabinus, a staid man with an obsessive interest in mechanical engineering and geology. Indulging in a clandestine flirtation with a handsome young artist restoring frescoes at her family’s villa, Aemilia pays scant attention to her future husband, or his scientific prognostications of doom for the city of Pompeii. When Vesuvius begins to erupt, however, Aemilia sees Sabinus in a new light—but is it too late?

“A Day of Fire: A Novel of Pompeii” releases on November 4, 2014.  Can’t wait to have the book in your hot-little-hands? DON’T—make a date with destiny, and make sure you receive your copy immediately by pre-ordering “A Day of Fire.”