This is the four-hundred-and-second anniversary of the death of Marguerite de Valois, Princess and then Queen of France, and central character in my novel, MÉDICIS DAUGHTER. Marguerite was the 8th child of Henri II of France and his queen Catherine de Médicis. Healthy, intelligent and beautiful—Margot was, sadly, never anyone’s favorite child, and may well have been Catherine’s least favorite. As I say in the authors to my novel:

Fate was not so kind to Marguerite de Valois. Nor was history. 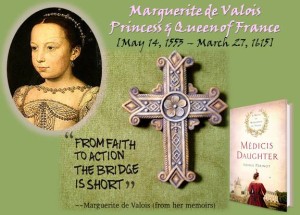 Salic law kept her from ruling in France after the death of her last brother, with the crown passing to her cousin/husband the King of Navarre. And a single anonymous political pamphlet during her lifetime was later taken for history not slander, leaving people with the impression Margot was nothing more than a wanton sex-addict. Yet the historical record shows that Marguerite was highly intelligent, politically astute, and (in her later years) a serious force in the literary life of France. She also had a fierce conscience.

I hope that in my novel I did this Princess justice.  For those who enjoyed my book, I recommend reading Margot’s own Memoirs—which provide a vivid exposition of France during her lifetime.

In mid-July of 1572 a French Huguenot nobleman, the Seigneur de Genlis, invaded Netherlands from France with 4,000 infantry and slightly less than 1,000 Calvary. It went badly. Don Frederic of Toledo routed the Seigneur and his troops at Quiévrain, and not two hundred Frenchmen survived (those who survived the battle proper where quickly slaughtered by local peasants). Gossip and fallout at the French Court was immediate.

A good number of courtiers and foreign figures (for example the Venetian ambassador) were sure Genlis had been sent by Admiral Coligny with the King’s knowledge. Others avowed, adamantly, that the Seigneur had gone without the knowledge or permission of either the King or the Admiral. 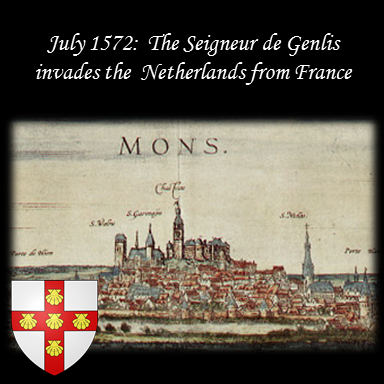 Frankly, and after years researching the Valois Court in this era, it is impossible for me to believe that the King did not at least know of Seigneur de Genlis’ plan in advance, whether or not he tacitly approved it, if for no other reason than the planned invasion was a very open secret at French Court. So much so that Spain caught wind of it making for an easy interception of the French near mons. Additionally, a letter evidencing Charles complicity found on Genlis when was taken prisoner.

Yet confronted with the invasions catastrophic failure, Charles denied that he sanctioned the expedition and congratulated Philip II on his victory. This represented more than a desperate effort to distance himself from a plan run amok.  His actions were at his mother Catherine de Médicis’ behest and she also demanded that he declare publicly that his subjects had disobeyed his orders in going to Flanders. All of this suborning of what was basically perjury was part of a larger struggle between the Queen Mother and Admiral Coligny for the role of chief-influencer over Charles. War with Spain was on the table and while Coligny pressed for it, Catherine was against it.

Less than two months later the winner and loser of this struggle would become painfully and bloodily clear.

Today marks the 497th birthday of Catherine de Médicis, Queen of France and a woman with many detractors.

Catherine did not begin her life with much to celebrate. Although she had illustrious parents—her Mother (Madeleine de La Tour d’Auvergne, Comtesse de Boulogne) was a French princess of royal blood and father was Lorenzo de’ Medici—both were dead within a MONTH of her birth (and that was incidentally only  about a year after their marriage). After they were gone, and because of her mother’s connection to the French crown, King Francis I claimed the right to raise the orphaned Catherine.  But Pope Leo told the French King to pound salt. His Holiness wasn’t all that caring—he just viewed Catherine, Lorenzo’s legitimate heiress, as a useful pawn.  Later in life, Catherine would remark that her eventual father-in-law, Francis I, was more of a father to her than His Holiness had ever been.

When in the fall of 1533, at age 14,  Catherine was shipped off to France to marry the future Henri II her new husband was not yet even Dauphin—merely a second son.  And he preferred another woman, his already established Mistress Diane de Poitier.  Catherine’s new country wasn’t impressed with Catherine either.  A report from one of the Venetian ambassadors declared that “all of France” disapproved of the marriage.  So Catherine’s early experiences of rejection continued.

Yet from these inauspicious beginnings arose one of the 16th century’s true female power-players.  A Queen who, left widowed with a large family, managed to keep her husband’s line securely on the throne during a time of nearly continual war. A woman who “managed” a series of boy kings—arguably to their detriment and France’s.  Historians may disagree strongly on both the content and efficacy of Catherine’s policies with respect to the Wars of Religion—and just about everything else—but no one would disagree that she was a key influence in the post-Henri II Valois era and as such she deserves as much credit for what went right in that period as she does blame for what went wrong.

The last of the Valois was initially buried at the Basilica of St Denis, traditional resting place of French Royals and the place where both her parents and her brothers lay. Unfortunately, the French Revolution showed no respect for the dead.  So the bodies of the Bourbon and Valois monarchs were removed from the Basilica to “celebrate” the October 1793 execution of Marie Antoinette, and given ignominious trench burials. The monument that marked Marguerite’s grave was destroyed. Today the location of Marguerite’s tomb is not on maps of burial places at St. Denis, although her brother Henri III and her parents Catherine de Médicis and Henri II are still listed.

Click here for more on the tragic revolutionary “Profanation at Saint Denis.”

Today is Maundy Thursday.  The final Thursday before Easter, Maundy Thursday commemorates the Last Supper—the event which established the Holy Eucharist.  Historically Maundy Thursday is associated with powerful figures washing the feet of the marginalized (a King might wash the feet of a pauper—see the stained-glass depiction below—and this year Pope Francis will wash the feet of a dozen refugees) as Jesus washed the feet of his disciples. Evidence of the rite of Pedilavium  (the Church’s term for this ceremonial foot washing) goes back to very ancient times and is considered a joyous rather than a solemn ceremony. The word “Maundy” comes from Latin for “command” and refers to Christ’s commandment to his disciples to “love one another as I have loved you.” 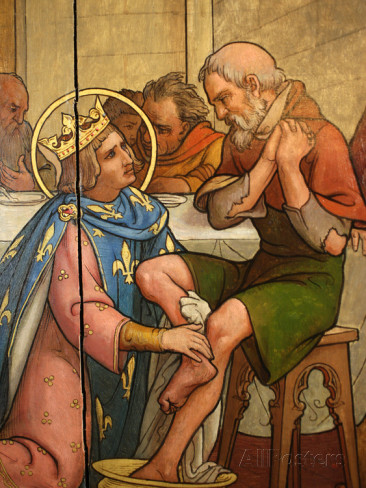 I cannot say when or why exactly I became slightly fixated on this particular religious observance, but Maundy Thursday makes multiple appearances in my work.  It was included in the original draft of The Sister Queens (Louis, seen at the right, was a hugely penitent man who not only frequently washed the feet of the less fortunate but liked to eat the leftovers of meals consumed by his favorite leper). King Charles IX and Queen Catherine de Médicis observe the Lenten foot-washing tradition in Chapter 2 of Médicis Daughter.  An occasion that finds a teenage Margot in no very good mood:

“Why do you pout?” My brother sidles up to me where I stand, watching Charles and Mother receive basins and ewers from the Cardinal de Bourbon. Nearby, a collection of Troyes’s paupers—mostly women and children—sit on a long bench, prepared to be the objects of royal Lenten piety.

“I did not realize I would be left out of some of the grandest ceremonies of the journey.”

Yesterday the King made a magnificent Entry into Troyes—riding beneath a canopy supported by dignitaries past elaborate set pieces and stopping to hear recitations of poetry written for the occasion. The residents of the city, from the wealthiest to the urchins roaming its streets, were permitted to witness it all. I was not. It seems the women of the court, even the Valois women, are not included in the proceedings that constitute a Royal Entry.

As for What’s Next . . . I can tell you this, Chapter 4 of my latest novel begins with a mumbled, “Last Supper” and Maundy Thursday marks some very dramatic events.

Today is a bloody anniversary.

Four-hundred and fifty-four years ago, on March 1, 1562 a massacre that began the first of France’s eight Wars of Religion occurred: the Massacre of Vassy.  Just six weeks earlier the Crown—young King Charles IX was on the throne and his mother Catherine de Médicis was regent—had signed the “Edict of January,” granting Protestants within French borders certain rights of conscience. The powerful Guise family—uber Catholic and thinking they knew better—wanted that edict rescinded.  The Duc de Guise (Francis, father of the Duc in my latest novel, Médicis Daughter) saw a chance to make that happen when, while traveling to his estates, he stopped in Vassy to hear Mass and happened upon a group of French Huguenot civilians worshiping in barn near the Catholic Church.  Francis and his men attacked. Seventy-four members of the Protestant congregation were slain, and more than one-hundred injured. Both numbers included women and children. 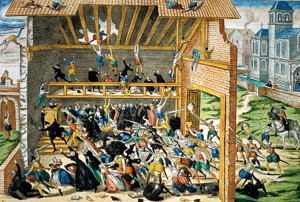 Not surprisingly, the massacre resulted in a newly militant attitude among French Protestants. In the wake of  Vassy the national synod of the reformed church appealed to the Prince de Condé to become “Protector of the Churches,” and he and those in his sway accepted the task.  This marked a switch in church leadership away from various pastors and towards “noble protectors.”  It also set the stage for decades of military clashes in the name of religion.

Hoping to cool matters down and in response to French Protestant calls for “justice” Catherine de Médicis appointed the Cardinal de Bourbon governor of Paris.  The Cardinal in turn immediately ordered both the Duc de Guise and the Protestant Prince de Condé to leave the city, but Guise refused (Condé left as ordered).  Catherine knew right then if she hadn’t known before that the Guises were going to be a serious thorn in her side.

January 31, 1246 – On this day (and as a result of the earlier secret conclave at Cluny) Beatrice, Countess of Provence, marries Charles d’Anjou, brother of Louis IX at Aix in Provence.

A list of “medieval celebrities” are present at the marriage, including: the bride’s sister Marguerite (Queen of France) and her husband Louis IX; Blanche of Castile, Dowager Queen of France;  the Dowager Countess Beatrice of Provence; and the bride’s prestigious Savoyard Uncles (Thomas and Count Amadeus IV).  When the groom complains noisily that the event lacks sufficient  grandeur (he had expected a magnificent affair in Sens or Paris),  Marguerite is NOT amused.  Eleanor of Provence will learn of her sister’s marriage into the Capetian line only after-the-fact,  and she will be furious.

January 1255 – Eleanor and Henry return to England after spending Christmas at the French Royal Court (on route home from Gascony).  Louis IX makes Henri III a present – an elephant the King of France acquired on crusade – while Marguerite gives her beloved sister Eleanor a peacock shaped washing bowl encrusted with jewels. 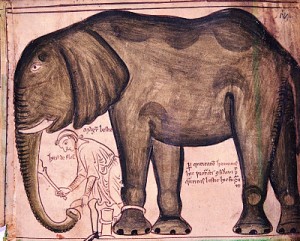 January 14, 1236 – Eleanor of Provence and Henry III of England marry.  This is THE MOST significant single event of Eleanor’s life. 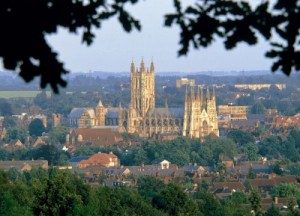 Eleanor’s bridal train arrives in Canterbury before it is expected.  Henry hurries to meet her and insists on marrying at once in a relatively private affair, saving the public spectacle for her coronation.

January 1234 – The papal dispensation necessary for Marguerite of Provence to marry Louis IX ofFrance(they were cousins) is granted.