My good friend and “goddess of historical fiction” Kate Quinn tagged me in this cyclical blog tour (make sure you pop over to Kate’s blog and see her answers then follow the chain back for insight into the minds and work habits of other historical fiction luminaries like Christy English and Stephanie Dray).  Four questions designed to reveal how we do what we do—write books that is.  Answering is harder than you think (as is writing books) because most of us write as we breath—because we are compelled to.  And, unless called to account by questions such as these, we don’t think a lot about it.

I am putting the finishing touches on “Daughter of de Médicis: A Novel of Marguerite de Valois” before handing it over to my agent for his input.  I consider the book a true bildungsroman, focusing on the psychological and moral growth of the enigmatic Marguerite de Valois from the point at which she comes to live with her brother Charles IX’s royal court as a young girl to the moment when she is transformed by a tremendous historical event (the Saint Barthlomew’s Day massacre in Paris) into an independent adult.  I’ve always been fascinated by Marguerite—daughter of a King, sister of three and wife of Henri IV.  Had she lived in England Marguerite would have ruled in her turn, but Salic law in France relegated her to the sidelines.  Her relationship with her powerful mother, Catherine de Medicis, is an important aspect of the novel.  Let’s face it, the mother-daughter relationship is always fraught with peril during the teen years, but imagine if your mother was Catherine de Medicis!

If you are interested in learning more about “Daughter of de Medicis” (including more cool sneak-peek quotes like the one below), it has its own Facebook page. 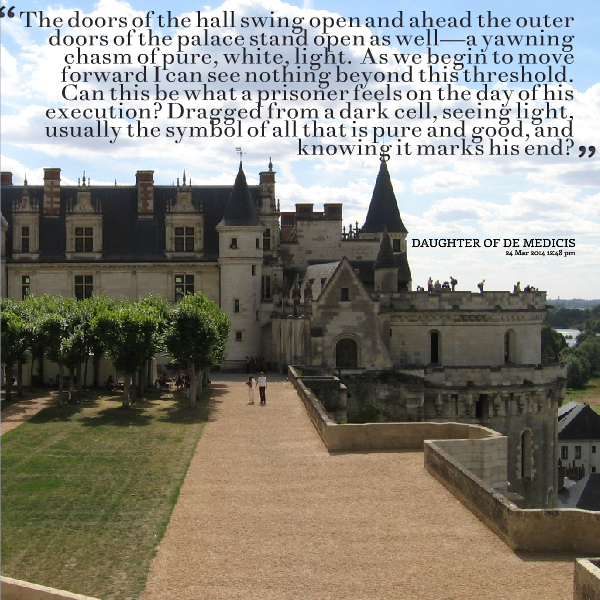 2) How does my work differ from others of its genre?

Every author’s voice is different.  I have mine.  You either like it or, perhaps, you do not.  But it is different from anyone else’s.  Beyond that I cannot opine because I make a conscious effort NOT to compare my work to the work of other historical novelists.  In writing as in life I find such behavior is not particularly productive.  More than that, it can lead to some pretty negative stuff/feelings.  I write for the joy of it.  I don’t view it as a competitive sport and I fear indulging in comparisons can too often lead to that.

I write historical fiction because I love to read it.  Also because I am a bona fide history geek (have my BA in history) from a family of history geeks (my only sister is actually a Professor of History). When I was a child, I visited historical sites while other kids were at amusement parks.  I also grew up watching all those Masterpiece Theater costume dramas of classic literature, and ninety-nine percent of my favorite books were (are) set in the past.  So, historical fiction was a natural niche for me.  Since I studied French abroad, and I am a devotee of Alexandre Dumas, peré, both my first novel (“The Sister Queens”) and “Daughter of de Medicis” have French history at their centers.

4) How does your writing process work?

“School is my friend.”  I bet every parent out there who works at home can identify with that.  When my writing is going well, the hours between dropping off and picking up my son from school are devoted 100% to writing.  This can have some unfortunate side-effects—usually in the form of the plaintive cries of family members claiming they are, in fact, wearing their last pair of clean underwear.  To balance my various roles and not feel like a hamster on a wheel, I try to be fully present and in each given moment.  I try not to think “oh my god, you should be writing” when I am not.  That kind of thinking tends to just create a guilt-induced writer’s block when I finally sit down at the keyboard.  Oh and I don’t compare my daily word count to others—ever.  I am a “slow first draft” writer, but the first drafts I eventually produce tend to be close to ready to handover to my critique partners, agent or editor.  Finally my process involves weekly summits with a pair of fellow novelist whose work I adore and opinions I respect.  We work through problems and set goals—basically we keep each other on-track and honest in a profession that can, by virtue of its solitude, allow for a good deal of procrastination.

Well that’s all she wrote—or rather how she writes (with the “she” being “me).  My friend Nancy Bilyeau is up next.  On Monday, April 7th she will offer insight into her own creative process, a process that’s led to her gripping Sister Joanna Stafford series (“The Crown” and “The Chalice” with a third installment on the way).  Check back here next Monday March 31st, and I’ll link to her site so you can see what her answers are.