Once upon a time I was young.  No, honestly.  Then as now I was a history nerd—big time.  In fact (trivia alert), I was the first member of my graduating class to declare a major in history.  Anyway, one day the younger me was given a postcard by her Woman’s History professor.  A postcard showing the black and white image of Belva Lockwood.  This image as a matter of fact. 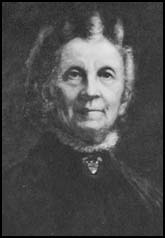 It took me a while to discover the importance of this gift, delivered, as I remember it, with no real explanation beyond the mild-mannered comment, “I thought you might like this.”  With age and distance I now realize my professor gave me the postcard to galvanize me to action; to make me angry—not at him but at the way history was taught and who got left out.  You see Belva Lockwood was the first woman to have her name on the ballot for President of the United States (yes, I know Victoria Woodhull “ran” but her name did not appear on official ballots and votes for her were never tallied).  She was also the first woman to be admitted to practice before the Supreme Court (though mind you she had to write to President Grant just to get the law diploma she’d earned and it took an act of Congress to see her admitted before the High Court).  But I’d never heard of her.

That DID make me angry, and it also made me think.  Just what does a woman have to do to be noticed, historically speaking?  Give birth to a King?  Have her head chopped off?  How can that be when there were so many women throughout history who did so much more?  Even today, Belva remains only the tip of the “over-looked” iceberg.  And because we continue to under-represent women in history and underestimate their activities readers—both of non-fiction history and historical fiction—often think writers get it WRONG when they accurately report what historical female characters did.

I recently saw an example of this in a book review.  A reviewer took Author X to task because her female main-character pressed her right to rule her own territories.  “How dare the author suggest,” and I am paraphrasing here, “that a woman in the Middle Ages would assert such authority, or would even have the desire to rule in her own right!”  The reviewer went on to castigate Author X for imposing modern feminist ideas on long dead women.  But the truth is plenty of women held territory (and titles) in their own right during the time period of the author’s book.  The reviewer was just wrong—likely because he/she had never heard of such women.  I remember wondering what said reviewer would make of the fact that my main characters’ uncle, Thomas of Savoy, was Count of Flanders only by marriage and lost that title when his wife died and her title passed to her SISTER.  My guess is the particular reviewer would think that bit of history was made-up, feminist-revisionism as well.

It is time to recognize, as consumers of history and historical fiction, that women have filled many, varied, roles throughout the centuries—even if we haven’t always heard about them.  Some women did extra-ordinary things with those roles (e.g. just like male rulers, some female rulers were better at it than others), but the fact women held such roles wasn’t, in and of itself, necessarily as extraordinary as modern audiences seem to think.  In each period of history we need to look at the specific facts rather than relying on broad assumptions.  For example, to assume things were necessarily better for women later in history than they were earlier is to incorrectly posit a linear progression in women’s rights and opportunities.

I am happy to say that, imo, there’s a lot of really wonderful historical fiction celebrating women who have been historically overlooked these days.  There are also fabulous books that examine “big name” historical women in new ways—as more than “ornaments of royal courts” or “mothers of kings.”  Personally, I am very interested in telling the stories of women who are more obscure than they deserve to be.  Probably because of that darned postcard.  When I stumbled upon a footnote in a history of Notre Dame de Paris about Marguerite of Provence (her image is carved over Notre Dame’s Portal Rouge) and her sisters I had a Belva Lockwood moment.  Clearly these young women (all of whom made significant political marriages) were celebrities of the High Middle Ages.  Marguerite and Eleanor were the queens of France andEngland for heaven’s sake!  Yet I had never heard of them.  I made up my mind right then to tell their story.

I wish Professor T was alive today.  I’d send him a copy of my book and I’d put the Belva Lockwood postcard in it—as an excellent bookmark and a thank you of sorts.