Today marks the 497th birthday of Catherine de Médicis, Queen of France and a woman with many detractors. 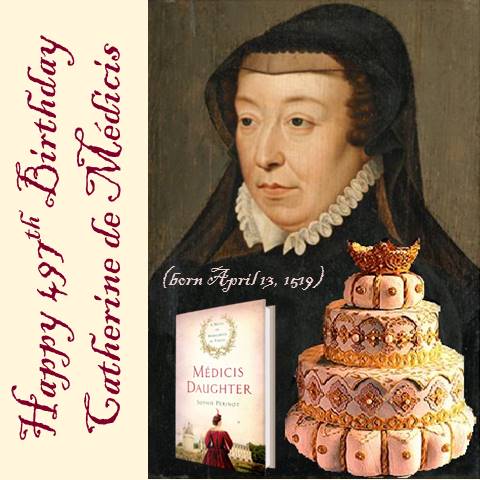 Catherine did not begin her life with much to celebrate. Although she had illustrious parents—her Mother (Madeleine de La Tour d’Auvergne, Comtesse de Boulogne) was a French princess of royal blood and father was Lorenzo de’ Medici—both were dead within a MONTH of her birth (and that was incidentally only  about a year after their marriage). After they were gone, and because of her mother’s connection to the French crown, King Francis I claimed the right to raise the orphaned Catherine.  But Pope Leo told the French King to pound salt. His Holiness wasn’t all that caring—he just viewed Catherine, Lorenzo’s legitimate heiress, as a useful pawn.  Later in life, Catherine would remark that her eventual father-in-law, Francis I, was more of a father to her than His Holiness had ever been.

When in the fall of 1533, at age 14,  Catherine was shipped off to France to marry the future Henri II her new husband was not yet even Dauphin—merely a second son.  And he preferred another woman, his already established Mistress Diane de Poitier.  Catherine’s new country wasn’t impressed with Catherine either.  A report from one of the Venetian ambassadors declared that “all of France” disapproved of the marriage.  So Catherine’s early experiences of rejection continued.

Yet from these inauspicious beginnings arose one of the 16th century’s true female power-players.  A Queen who, left widowed with a large family, managed to keep her husband’s line securely on the throne during a time of nearly continual war. A woman who “managed” a series of boy kings—arguably to their detriment and France’s.  Historians may disagree strongly on both the content and efficacy of Catherine’s policies with respect to the Wars of Religion—and just about everything else—but no one would disagree that she was a key influence in the post-Henri II Valois era and as such she deserves as much credit for what went right in that period as she does blame for what went wrong.