As some of you know, I contribute monthly to a very informative writers’ blog called From the Write Angle.  Today is my day to post there, and I am blogging about two subjects near and dear to my heart – the pressing desire of debut authors to avoid being “one book wonders,” and professional self-discipline.  To wit, I argue that as a writer exercises of  self-discipline are required to build an audience and keep them coming back for more. 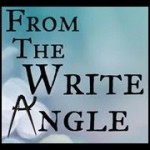 So if you came here for your daily dose of Sophie only to be disappointed (yes, you Mom), head on over to From the Write Angle.

Before I got up the guts to start this solo blog, I cut my blogging teeth by becoming an active member of the writers’ blog, From the Write Angle.  A group of us who met through AgentQuery Connect and had begun to inch up the ladder of publication together decided to blog together.  The premise of our undertaking:

We learn best, not from our bigger than life heroes, but big brothers and sisters. We run fastest to catch the person just in front of us, not who has already finished the race. We seek The Write Angle to help you, not because we have reached the summit, but because we are in arm’s length, and when you are arm’s length ahead of us, we hope you’ll remember how you got there

I for one have learned so much from the posts of my fellows over at From the Write Angle, and I think you might enjoy their viewpoints on a variety of writing topics.  Also, I continue to blog monthly at that location.  So, if you just can’t get enough of me here (snort) check out From the Write Angle.  My July post (new today) is called Letting Go to Help Our Book Babies Grow and addresses the need for authors to allow publishing professionals to do their jobs.

I am a long time member and BIG time fan of AgentQuery Connect.  For those aspiring writers who do not know AQ run don’t walk to the website as it is a fantastic source for information on every step of the road to being repped and published, a very supportive writing community, and (most importantly for the purposes of this post) good spot to get feedback on a query letter before you send one out.

Now anyone who’s ever drafted a query letter (the pitch letter writers send to agents) knows it takes time.  The letter is a vital sales document. Write it well and you snag the interest of an agent and a coveted request for a partial or full. Write it poorly and you may never even warrant a form rejection.  Writing a good query is not easy (there are hundreds if not thousands of articles and blog posts offering advice on how to compose a good letter).  BUT should it really take months and drafts in the double-digits?

At the risk of aggravating many I say no.  In fact I say, NO, NO, NO.  What I’ve noticed, watching query critique threads over the months and years, is that writers become paralyzed by fear and good intentions.  Writing their query becomes a Sisyphean struggle (you remember, the guy who had to push the big rock up the hill over and over) and in the process time, enthusiasm and confidence can be lost.  At some point the incremental improvements their letter is arguably making are not worth the agony.  More than this, letters can lose voice (see my post on this topic at From the Write Angle).  Looking at critique threads with ten, twenty, thirty, even fifty versions of a single query, I want to scream GET ON WITH IT, or SEND THE DARN THING.  But that kind of verbiage in individual critique threads would hardly be appropriate.

So I am saying it here. Just DO it. Query.

I am not saying send your first draft.  I am not saying don’t seek critique.  I am saying all things in moderation.  How many drafts of my letter did I do – maybe four.  How many people did I show it to for review before it went out?  Five (and two of them weren’t even writers).  Did it work?  More than uncommonly well (I had a very high request rate, snagged an agent I adore and now have a publishing contract).  Could my letter have been better? Sure. But if I were still working on polishing it, then my book wouldn’t be coming out in March 2012 would it?

The discovery that my forthcoming historical novel, The Sister Queens, had appeared on Amazon for pre-order was magic – magic with a little “humbling experience” tacked on for good measure.

I was ecstatic when a friend told me that my book was listed. Here was proof indeed that I had not imagined the whole “book deal thing.” Ha, I thought, let’s see NAL wiggle out of this now. But my enjoyment soon led to a sober realization – you are only as good as your sales and rankings. I may have a book listed on Amazon (and IndiBound and Books a Million. . .) but I am NOT a household name. I am not even close.

What, you may ask, brought this fact home to me? To paraphrase Pixar’s marvelous Toy Story, “a child’s plaything.” You see I am NOT the first “Sophie” Amazon suggests when one goes to the search window and begins to type. Doing this (when I should have been researching my next work of historical fiction) I discovered that when I get to “p” (s-o-p) Amazon kindly suggests another Sophie – obviously a sales-super-star – “Sophie the Giraffe.” I was not familiar with Ms. Giraffe before this, or with her body of work. Sophie the Giraffe is a teether, as in infants gum her with vigor, drop her on the floor and then squeal impatiently until she is returned to their grasp. I have included a picture of Sophie G so you can appreciate her magnificence.

Coming behind a rubber toy in a “suggested search” list is a humbling experience. But when I looked more closely at Sophie G, I realized I could learn a thing or two. Sophie is NUMBER ONE in the Amazon “Baby” bestseller rankings (we will not discuss how far from number one I am on any list presently). She gets an average of 4.5 stars from reviewers. And she is able to command some serious cash for a figure only 7” tall. In fact, a single giraffe teether costs $7.00 more than a copy of my novel. Wow (hint to readers, buy the book – I don’t care if you chew on it).

Sophie G is obviously doing something right. Here’s what I think.