Today, while on a short break from the mega-tour for my own latest novel Ribbons of Scarlet, it is my very great pleasure to host my good friend the insanely talented, multi-published, Anne Easter Smith in a Q&A to talk about her upcoming novel: This Son of York (releasing November 10th but you can pre-order now HERE).

This Son of York concludes Anne’s best-selling Wars of the Roses series. She’s made the much maligned Richard III, who was brought into new focus following the discovery of his bones under a car park in Leicester in 2013, her protagonist and is determined to give us a very different view of Richard than Shakespeare and stereotypes have . . .

Anne, people have very strong opinions about Richard III despite the short time he was on the English throne. Writing about Richard is, in many ways, like walking out into a battlefield mid-conflict, so let me start right off by asking why a novel centering on Richard? What compelled you into this contentious territory?

I love a good battle! Especially one with horses, armored knights, and longbows. But as far as Richard is concerned, he became a cause for me once I took in the Josephine Tey theory that those adorable princes in the Tower weren’t murdered by their hunchbacked uncle Richard but may have lived into the next reign. Horrible Henry Tudor (no, not that one with all the wives but his father) had far more to lose than Richard if indeed those little boys were still alive, because he had no right to the throne. But I digress.

Tey’s book Daughter of Time got me researching everything I could about Richard and the Wars of the Roses, and after five decades I feel quite knowledgeable enough to have written my version of Richard’s story. You may be surprised to know that faux news began a lot earlier than today! Shakespeare’s sources for his play were Tudor historians who spun the historical facts about Richard so well that we still believe them today (even though much new evidence has come out in the meantime, if not exonerating Richard of those many crimes laid at his door, at least raising plausible doubt.) Being a Brit, fair play is in my DNA, and Richard has been unjustly depicted through the centuries.

What is the pernicious misconception about Richard that you’d most like to correct in the minds of readers?

That he murdered his nephews in the Tower in order to “steal” the crown. No bodies have ever been found, no evidence they were even murdered, and no witnesses or confessions to the deaths have surfaced in all this time. From everything I have studied about Richard, he was never interested in wearing the crown. It was pushed on him by Parliament when the princes were revealed to have been illegitimate (their dad, Edward IV and Richard’s brother, had been secretly “contracted” to a woman prior to marrying their mum.)

Is there such a thing as a fun-fact when it comes to Richard III—and if so can you share one?

Hmmm, I don’t have him picking his teeth with his knife (that was a no-no even for the most ill-bred), but “fun” and Richard is a bit of an oxymoron. He was a naughty boy before he married Anne Neville (at 19), because we know he had two and possibly three bastards. He was very discreet about their mother(s), but two of them were brought up in his household and mentioned in letters and household accounts.

I know This Son of York has taken considerable time, research and thought on your part, can you offer us a little window into your process of creating the book?

After Royal Mistress was published in 2013—the fifth book in my series about the Yorks during the Wars of the Roses—I thought I was done with Richard and his family, and I started to write a wonderful story about a Portuguese prince and his mistress in 14th century. (It took me several years of research and three trips to Portugal to feel comfortable writing about this prince.) And then they found Richard’s grave under a car park in Leicester in 2012 and I was so excited and intrigued by the new information the bone analysis gave us of him that I dropped poor Pedro into the Tagus River and took up Richard’s cause again. After all, I had every date and event and character I needed to write about still stuck in my brain, but with new info on Richard—like severe scoliosis and that he drank heavily in the last two years of his life—I was moved to return to Richard and write his story for a new century.

My process is mostly being as organized as possible. I have charts of timelines where I make sure no real person is in the wrong place at the wrong time, unless it’s unclear and then I can fictionalize meetings or scenes. But I don’t mess with history.

Thank you so much for taking the time to stop by the blog and begin to set the record straight on Richard, Anne!

Thank you so much for hosting me here, Sophie. I am so passionate about readers knowing more about Richard than Shakespeare’s “bunch-backed toad” and I think I am giving them a more balanced view of this much-maligned king. He only lived to be thirty-two, and only reigned for two years, but his whole life was devoted to being loyal to his family, his king, his wife, and if I get just one person to change their opinion of him by doing the research I did, I will be satisfied! I promise you, his is quite the dramatic story!

Finally for those who want to purchase This Son of York—and after reading Anne’s answers I am betting that is everyone—remember if is available for pre-order on Amazon! Below I’ve included a description of the novel, and some of the praise it is already garnering!

Anne Easter Smith has written five well-regarded novels set in the War of the Roses, but the one she has been preparing to write, both in her imagination and after fifty years of research, is this novel about Richard III. Her mission was to bring Richard Plantagenet the man to life and let him speak directly to us in this meticulously rendered novel.

—Margaret George, International best-selling author of Elizabeth I and The Confessions of Young Nero

Deeply researched, the book bursts with action but even more importantly we are given passages of real feeling between human beings we think we may know but perhaps never completely understood until this book. It is a moving, insightful, and engrossing depiction of the controversial king.”

A wonderfully realized life of tragic, doomed Richard. The author uses the latest discoveries and old texts to fully explore the complicated ‘crouchback’, and give us a fine portrait of the lover and the warrior, a noble, flawed and heroic king and man.”

THIS SON OF YORK

Concluding her best-selling Wars of the Roses series, Anne Easter Smith has made Richard III her protagonist in her latest book This Son of York. The much maligned Richard is brought into new focus following the discovery of his bones under a car park in Leicester. 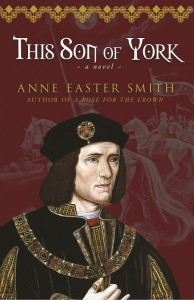 As the fourth son of the duke of York, Richard of Gloucester could not have hoped for much more than the life of a wealthy, but insignificant nobleman. Instead fate took him down a drama-filled, unexpected path to the throne. As York challenged Lancaster for the crown, early tragedies and betrayals, including by his faithless brother George, led the young Richard to count on none but himself. Imbued with the traits of loyalty and duty to family and country, he proved them time and again especially when he reluctantly came to wear the crown. Buoyed by the love of two women, he stayed true to one while cherishing the other, both helping him bear the burden of his scoliosis.

A warrior of renown, a loyal brother, loving husband and father, a king mindful of injustice yet beset by betrayal, and a man convinced his God has forsaken him by burdening him with crippling scoliosis, This Son of York has a compelling tale to tell. With her meticulous attention to detail—and the truth—Easter Smith’s compelling storytelling paints a very different picture of the king Shakespeare reviled as “…thou elvish-marked, abortive, rooting hog.”