November is traditionally the season of THANKFULNESS. So just for fun I’ve done a little list of things you might be thankful for if you were trying to navigate (and SURVIVE) the 16th century French Royal Court.

No. 1: That you are NOT Marguerite de Valois, the youngest Valois Princess, because if you were your mother, Queen Catherine de Médicis, would be offering you a dismal string of prospective husbands including: a mad man, an old man who’d already been married to your own sister, a man who hated women, and a notorious heretic. What’s a girl to do?

No. 2: If you are Admiral Coligny you’d be VERY thankful that you bent down to tie your shoe at just the right moment to avoid having your head blown off by an assassin. Sure you lost part of a finger and you were pretty badly wounded, but you are alive! But so fast there Gaspard . . . you’re not out of danger yet!

No. 3: You’ve never slept with the Princesse de Porcien. If you had you might well end up crucified—at least artistically—because this lady (who eventually became the Duchesse de Guise) had the bizarre habit of having former lovers portrayed in her devotional book (her Book of Hours) crucified.

No 5: You keep a careful hit-list of all your enemies (real and imagined). I mean you never know when a massacre is going to start and you want to be ready. You might not have thought to make a list of your grudges, not to mention the people you owe money too .if it hadn’t been for that secret census of Protestants the authorities complied from the tax roles in your district of Paris (and every other district as well). There is no denying neighborhood hit lists come in really handy once a massacre starts, and is anybody really going to care if some of the folks on yours are good Catholics rather than nasty heretics?

MÉDICIS DAUGHTER because the Valois are sexier than the Tudors (and more dangerous as well)! 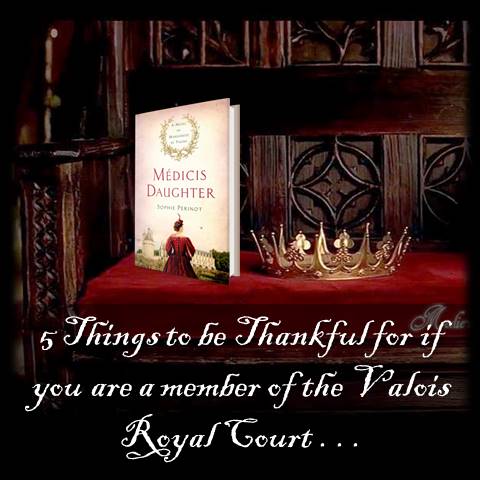 “Thank you to Sophie Perinot for introducing me to a whole new section of historical fiction to now become obsessed with (move over Tudors)!”

Thank YOU Colleen at A Literary Vacation, and readers everywhere.  Without a receptive audience what we writers do would be a little like a tree falling in the forest with no one to hear it. 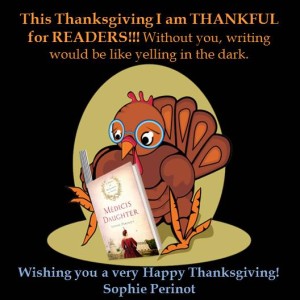 Yes I am SUPER thankful for readers, and particularly readers who take the time to review. Because here’s the thing: word of mouth is still the most powerful tool in the world when it comes to supporting novels.

So Thanks A Literary Vacation for this doozy of a review!  For embracing the characters I lived with for so many long months and letting them become as real to you as they are to me:

I think one of my favorite thing about Margot (and really all of these characters) is that she isn’t perfect, not even close. Sophie Perinot did an astounding job of making each character so well rounded and complex that they felt wholly real to me, not just glitzed up or vilified representations of what someone might want them to be.

And for understanding and perfectly expressing the essence of Médicis Daughter:

With all this going on (and there is a lot of action and intrigue to delight in, perfectly presented by the author) the real heart of the story, to me, is much smaller: that of a beautiful, intelligent girl long held prisoner to her family’s demands, threats and machinations finally learning how to break free, at least in part, from their control to become the woman of honor she longs to be.

I couldn’t have said it better myself!