I am very pleased to share this exciting news about “what’s next” in my writing career:

Sophie Perinot sold world English rights to her historical novel Medicis Daughter to St. Martin’s Press editor Toni Kirkpatrick. Agent Jacques de Spoelberch represented the author. The book is set in 16th-century France and follows a beautiful princess who, de Spoelberch explained, “walks the knife edge between the demands of her serpentine mother, Catherine de Medicis, and those of her conscience.” Medicis Daughter is set for a late 2015 release.

That’s right my latest–a novel of a Marguerite de Valois, daughter of a king, sister to three kings and wife to the eventual Henri IV of France–will be released by Thomas Dunne in hardcover. Watch this space for updates and a future cover reveal. 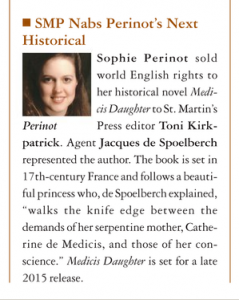 A number of you have been asking me “what’s next, Sophie?”  With great pride and pleasure I announce that THIS is next:

A Day of Fire: A Novel of Pompeii 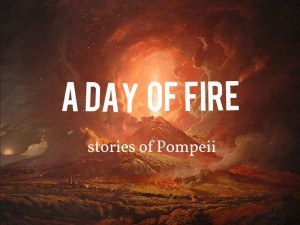 Prepare to take a leap back in time with me to 79 AD, when Pompeii was a lively resort flourishing in the shadow of Mount Vesuvius at the height of the Roman Empire. When Vesuvius erupted in an explosion of flame and ash, the entire town would be destroyed. Some of its citizens escaped the mountain’s wrath, some died as heroes . . . and A Day of Fire will tell their stories. The book is a high-concept piece—a  novel in six parts by Stephanie Dray, Ben Kane, Eliza Knight, Kate Quinn, Vicky Alvear-Shecter, and yours truly.  We will bring you overlapping stories of patricians and slaves, gladiators and heiresses, villains and heroes who cross and recross paths during Pompeii’s fiery end. But who will escape, and who will be buried for posterity?

My story—The Heiress’s Tale—will lead the collection.  So mark your calendars!  A Day of Fire releases on November 1, 2014.