It is my very great pleasure to welcome fellow NAL author Erika Robuck to the blog today for the second in my “Get to Know the Authors I Know” series.  Erika’s debut, Hemingway’s Girl released earlier this month. 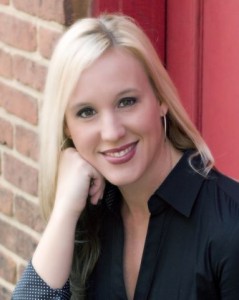 Set in Key West in 1935, Hemingway’s Girl centers on a young woman named Mariella Bennet who takes a job as a housekeeper for Ernest Hemingway and his second wife, Pauline, in order to support her widowed mother and to realize her own dream of starting a charter fishing boat business.  Mariella  quickly becomes entangled in the tumultuous world of the rich, their friends, and a marriage doomed for failure.  Torn between her infatuation with the writer and relationships with a WW1 vet and a boxer, Mariella soon learns that she may be in over her head on all fronts.

1) Erika, Your book tells the story of Mariella Bennet, a fictional maid hired by Ernest Hemingway’s second wife.  Is this book really her story or Papa’s?

Mariella is such a feisty, colorful character, that she stole the show about halfway through my first draft. She has a formidable opponent in Ernest Hemingway, but he never overshadows her.

2) Are you a big Hemingway fan yourself?

I am obsessed with Hemingway, and have been since I was nineteen years old and first read his work, just like my protagonist.

3) Where have you traveled for inspiration and research for Hemingway’s Girl?

My travels began in Key West at his house. I later flew up to Boston to the JFK Museum where 90% of the Hemingway archive is kept. I’m hoping my journey eventually takes me to his grave in Ketchum,Idaho.

4) Truth is often stranger than fiction.  During your research for Hemingway’s Girl what was the most unusual or unexpected thing you discovered?

By far, the most unusual and disturbing story I found was of a Key West resident named Count Von Cosel, who faked being a doctor, fell in love with a tuberculosis patient decades his junior, and mourned her death so terribly that he exhumed her body and kept it in his house for years by rebuilding it with wax and preservatives. When the body was discovered, it was put on display for
several days so the residents of Key West could see it, before being returned to a secret grave in the cemetery where she was originally buried. The most bazaar detail about the story is that the residents of Key West thought that what he did was tragically romantic. The Count makes an appearance in Hemingway’s Girl. 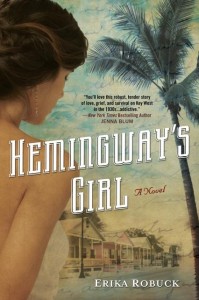 Wow, that’s a very hard question. My knee jerk response for my favorite was Hemingway, but then it became Mariella, and then Gavin the boxer, and then John the legless WWI veteran. I can’t pick because they are so vividly alive for me, and I love them all. If I had to pick my least favorite, it would have to be Hemingway’s second wife Pauline, who had an affair with Hemingway while he was married to his first wife, but I do have a degree of sympathy for her.

6) Can you share a secret about your book (or the writing of it–something that readers can’t discover from the text itself?

Yes, and my critique partner, Kelly, is going to kill me for this: In the scene where John tells Mariella that his fiancée had sent him a ‘Dear John’ letter in the mail while he fought in WWI, Mariella tells him she’ll bash in the girl’s legs with a bat if he’d like. Those were the exact words Kelly said to me when an agent had strung me along with my first novel and ultimately passed after I
spent thousands of dollars on an editor. It made me laugh so hard that I had to include it.

7) As someone who came to writing as a second career herself I am always interested in how people become writers.  How did it  come about for you?

In my first life I was an elementary school teacher, but when I had my firstson I left teaching to stay home with him. As his naptimes became regular and lengthy, I finally found time to devote to writing, which I’d done as a hobby
my whole life. It became a wonderful outlet for me that grew and grew until now, when it is a career. I’m very blessed.

8 When you write are you a plotter or a panster?

I’m a definite plantser. I make detailed timelines of historical events, but once I draft, I allow myself freedom with my characters within the confines of  historical truth, of course.

9) Which is most likely to spark the idea for an Erika Robuck novel—a time period, a specific event or a character?

A character, usually connected to a location, sparks my ideas. For my first  novel, it was a visit to the Caribbean that
set my imagination on overdrive wondering what it would be like to inherit an abandoned, haunted plantation. When I visited Hemingway’s Key West house, I was overwhelmed with ideas  for scenes as I walked through each of his rooms. Reading about how much  Hemingway hated Zelda Fitzgerald inspired me to learn more about her, and to visit the places in Baltimore where she and F. Scott had been.

10)  Authors of historical novels walk a line between known historical facts and fiction.  Where do you draw the line on your personal map between accuracy and imagination?

I try to be absolutely true to the time and the events of the subject’s life.  Any flexibility I utilize is found in my fictional protagonists’ stories. If  I’m aware of any specific inaccuracy or ambiguity, I mention it in a Reader’s Note

11) Do you have a special writing spot—a lair perhaps where you like to do your work?  Is there a picture you could  share?

I prefer to write at my desk, in my office, surrounded by artifacts, photographs, and posters of Hemingway and Zelda. I listen to classical music while I work, and always have a mug of coffee or tea within reach.

12) If you could read any book again for the first time, what would it be and why?

I would love to read POSSESSION by A. S. Byatt again for the first time. Her  novel about scholars researching dead poets and their love affair is written in  prose and poetry, in the present and in the past. The poetry is from two different characters and has two distinct styles, and every word has weight. I had assumed they were real poets and real poetry until I found out that Byatt
had created it all. Every last word. I bow to her as the master. Also, the ending was so evocative that I threw the book across the room and cried.

I’m working on another historical novel featuring the poet, Edna St. Vincent Millay, as a character. Expect scandal, drama, betrayal, and views of the creative process as redemption.

Thank you Erika for those insights into your novel and your writing process! Readers, if you live in the metro-DC area, Erika will be in Arlington, VA at “One More Page Books” for a signing on September 26th (yes, two days from now).  I for one plan to be there 🙂

About Erika:  Erika is a contributor to popular fiction blog Writer Unboxed and maintains her own historical fiction blog called Muse. She is a member of the Maryland Writer’s Association, The Hemingway Society, and The Historical Novel Society. She spends her time on the East Coast with her husband and three sons.  Her next novel, Call Me Zelda, is scheduled to release in 2013.  To learn more about Erika visit her website.