Born in 1553 the protagonist of Médicis Daughter, as you will discover in my novel, was much more than history gives her credit for.   I always think of her on her birthday and wonder “what if” (what if Salic law hadn’t prevented her from ruling in France when her last brother–Henri III–died? What if she’d be able to give her husband Henri IV a son?).  I hope that in my novel I have given her a gift: a story that is worthy of her and undermines the pernicious rumors—started by political pamphleteers in her own time—that she was a wanton, a hedonist and not much more.  So maybe my book is a birthday gift, belated but nonetheless . . .

Well yesterday I got a present: A box, perched atop my mailbox, containing the bound galleys of Médicis Daughter.  They weren’t expected.  They could have come any day.  But they arrived on Marguerite’s birthday.  A sign? I sure hope so!

Voila mes amis! I am very pleased and proud to introduce you to the visually stunning cover for my next novel, Médicis Daughter: A Novel of Marguerite de Valois.  Yes, that is Marguerite in the forground and the goreous, iconic Chateau de Chenonceau in the background (a palace that is one of the settings from the book).  What’s my favorite thing about it if I can’t say everything?  The small, sinister, dark bird Margot is looking at in the sky.  Psst, readers, keep an eye out for black birds as a recurring theme in the novel.

For those of you who are super eager, as of today you can pre-order Médicis Daughter on Amazon. 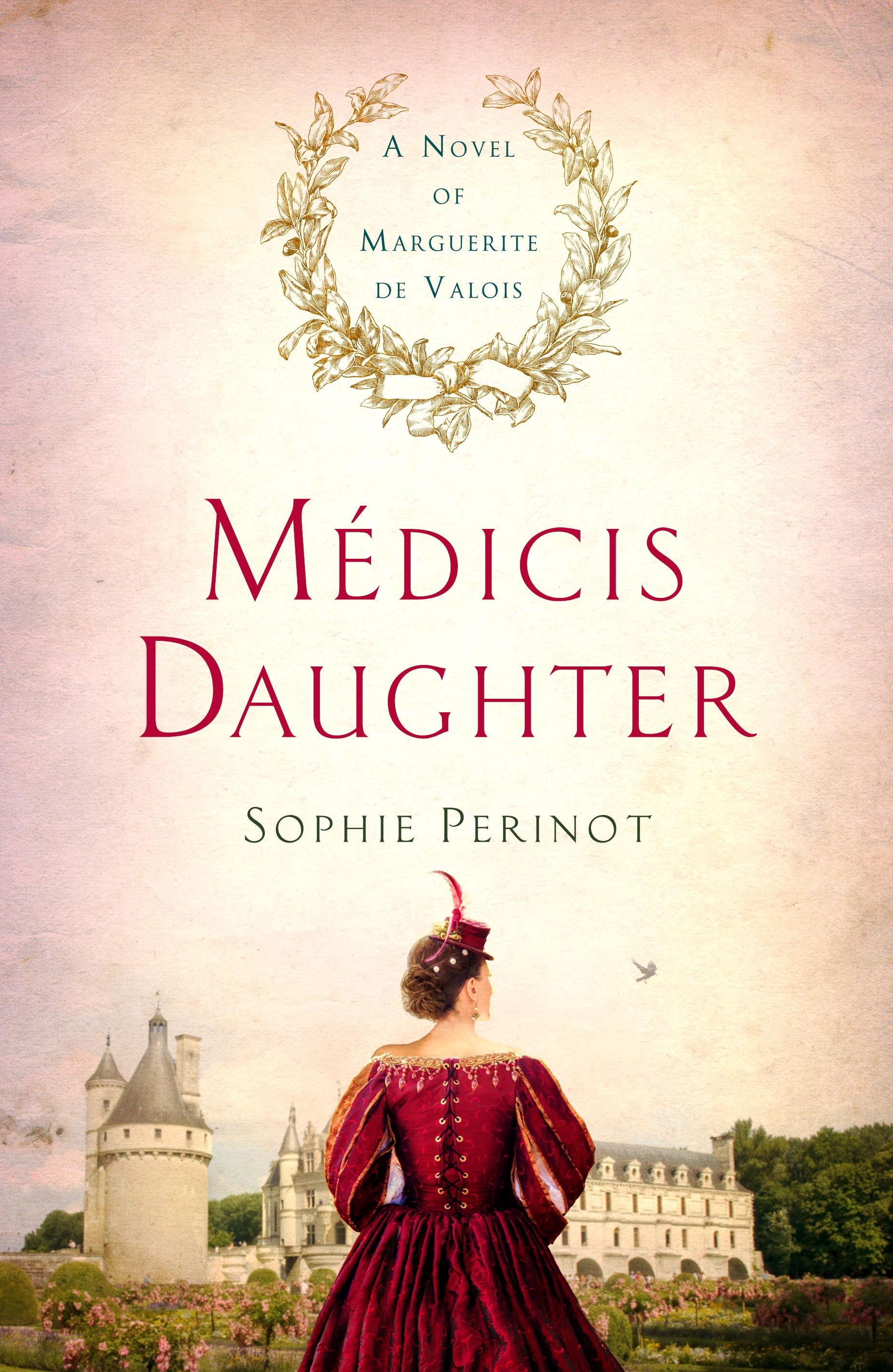 It suddenly dawned on me, dear followers, that I have been negligent–I never  announced the release date of my next novel here at the blog.

Médicis Daughter: A Novel of Marguerite de Valois will release on December 1, 2015 in hardcover.  I have a fabulous new publisher (Thomas Dunne) and editor.  What is the book about? So glad you asked!  Here is a teaser:

Mother’s black eyes sparkle. “So, Margot, it seems you are a daughter of the Médicis as well the Valois.

16th Century France twists under the serpentine rule of Catherine de Médicis. At a court seething with intrigue and riven by religious war, beautiful Princess Margot walks the knife edge between the demands of her dangerous family, and the demands of her own conscience. Her chief value to the crown is as a pawn in the marriage game, to bring France a valuable ally or seal a tenuous peace. Even though her heart belongs to the powerful, charismatic Duc de Guise, her hand will be offered to the King of Navarre, heretic and rebel to the crown.

Margot does her duty, heart breaking, but the promised peace is a mirage: her mother’s schemes are endless, and her brothers plot vengeance in the streets of Paris. When Margot’s wedding devolves into the bloodshed of the St. Bartholmew’s Day massacre, she will be forced to choose: her family, or her soul?

The book is not yet available for pre-order, but you can add it to your “Want to Read” shelf at goodreads, and follow latest developments at the Médicis Daughter official facebook page.  One of the things you will see a lot of there are illustrated quotes from the novel to whet your appetite. I’ve put three below just to tempt you over to facebook. 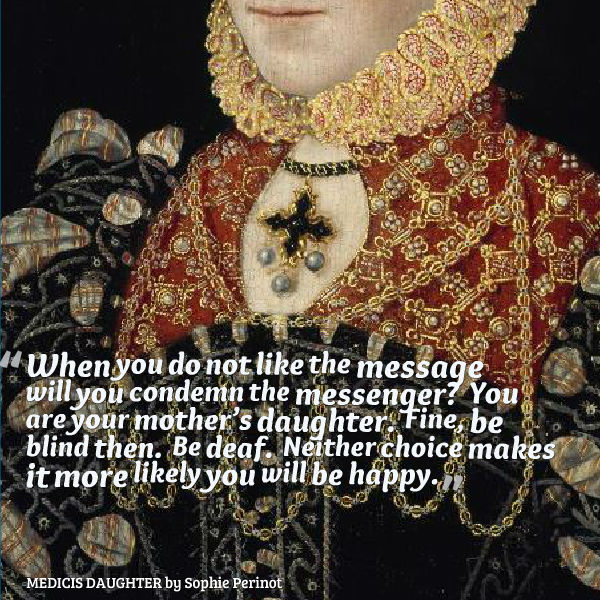 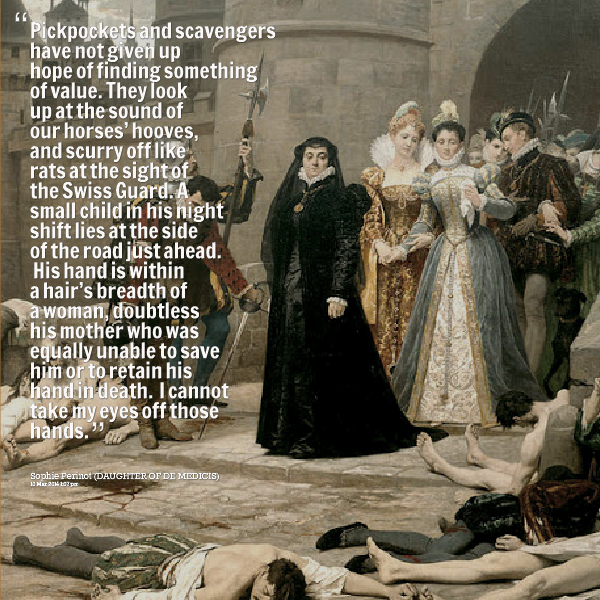 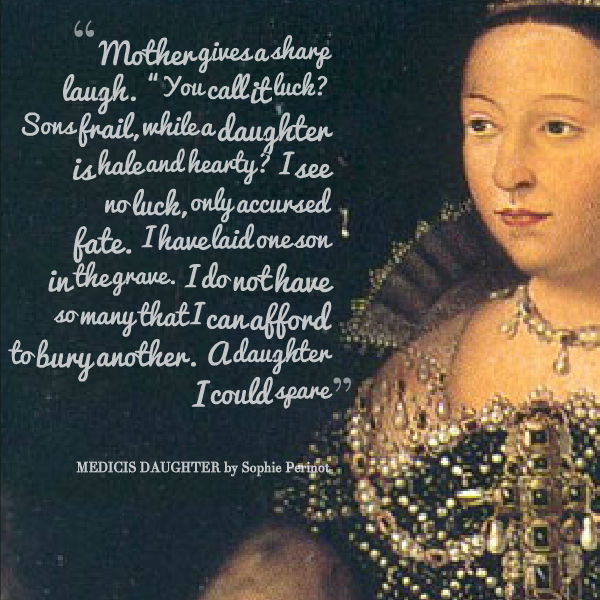 I’ve been tagged by the talented historical thriller writer Nancy Bilyeau (author of The Crown) in a blog game called The Next Big Thing. The game involves authors answering questions about their work in progress (aka WIP). So I am “it” for the moment, and I am off to the 16th century to talk about the mother-daughter story I am writing. Come along! Will my WIP be the next big thing? I sure hope so, but only readers can make that decision.

Here we go. . . my answers to the OFFICIAL “Ten Questions for The Next Big Thing”:

1. What is the working title of your book?

2. Where did the idea come from for the book?

It sprang from the intersection between two strong personal interests. First, I have been fascinated with the Valois royal line since I read Alexandre Dumas’ book La Reine Margot as a teen, and I’ve been particularly obsessed with the oft maligned Marguerite de Valois, youngest daughter of Catherine de Medici and Henri II of France. Second, I have a preoccupation with the relationships that shape women’s lives—especially formative female-to-female relationships. Daughter of de Medici unites those two interests by exploring the sacred, complicated and oh-so-seminal mother-daughter relationship with Marguerite de Valois and Catherine de Medici as main characters.

3. What genre does your book fall under?

Historical fiction. I just can’t imagine writing about the present.

4. Which actors would you choose to play your characters in a movie rendition?

I would cast Keira Knightley to play Marguerite as she has both the beauty (Marguerite was often called the loveliest woman in France) and the depth for the role. If Keira was busy I’d cast Natalie Portman. I’d want Virna Lisi to play Catherine de Medici because she did a breathtaking job in that role in Patrice Chéreau’s 1994 film La Reine Margot.

As for the men in Marguerite’s life, I would cast Benedict Cumberbatch as Henri, Duc de Guise (Marguerite’s first love) or Robert Pattinson if Benny is deemed too old. I’d choose Joseph Gordon-Levitt as Marguerite’s older brother Henri, Duc d’Anjou (future Henri III of France) and Nicholas Hoult as her younger brother François, Duc d’Alençon. I am genuinely stumped on casting Henri de Navarre (Marguerite’s husband and the future Henri IV of France). I am sure the moment I post this I will think of THE perfect casting but for now I’d probably choose Jesse Eisenberg or Anton Yelchin.

5. What is the one-sentence synopsis of your book?

Not really a synopsis—more of a tag line: “Every mother-daughter relationship is fraught with peril. Her mother was Catherine de Medici.” END_OF_DOCUMENT_TOKEN_TO_BE_REPLACED