Last week I offered a peek between the covers of the upcoming “A Day of Fire” and challenged readers to match the stories therein with the authors contributing to the volume.  Today, I offer another set of illustrated quotes along with full disclosure of who wrote what.  Come along for a guided tour of the novel-in-six parts which releases three weeks from today:

It all begins with a son–Vicky Alvear Shecter’s story “The Son” to be exact, about a young man who is looking for love in the proverbial wrong places while also trying to hang on to the good opinion of his famous uncle, Admiral Pliny.  In bustling Pompeii he meets a whore named Prima–a woman readers will come to know better in Stephanie Dray’s tale. 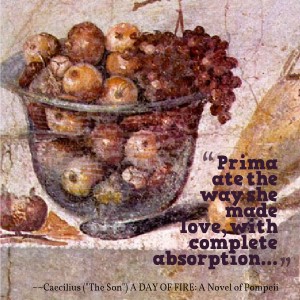 While Caecilius is sneaking around the city on pleasure bent, Aemilia the heroine of my story–THE HEIRESS–is counting down the days to her wedding.  Betrothed to her father’s best friend she knows her duty, but also her heart which lies elsewhere in the keeping of a handsome young artist. 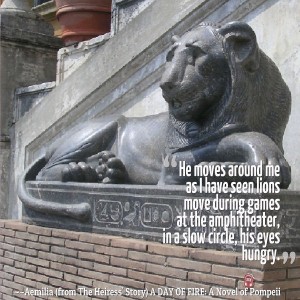 While Faustus prowls the Villa of the Mysteries looking for his Aemilia, author Ben Kane’s Lucius Satrius Rufus–title character in  THE SOLDIER–has a hangover and massive load of debt to manage.  Can a win by the gladiator he owns straighten things out? 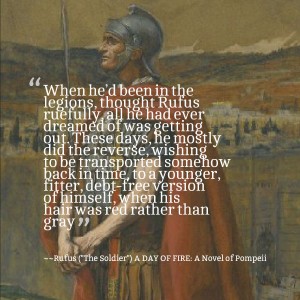 Senator Marcus Norbanus in Kate Quinn’s THE SENATOR has his own problems–among them an aging body and a waning will to live. He is in Pompeii on official business when he has a run in with Caecilius’ whore Prima. 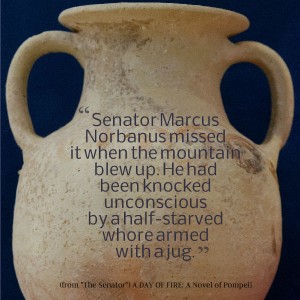 While he is recovering from his encounter with the jug, young mother-to-be Julilla, heroine of E. Knight’s THE MOTHER, is on her way by litter to her friend Aemilia’s house to help her dress for her wedding.  A journey she does not complete. 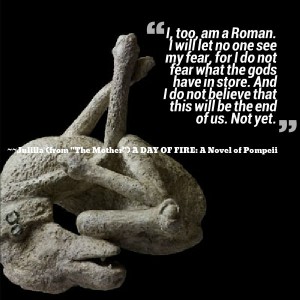 Who will survive and who perish? Readers will have to wait for Stephanie Dray’s THE WHORE to know for certain. There they will reconnect with Prima and spend time with her rosy, blonde and good-natured sister Capella a woman called to serve the Goddess Isis. 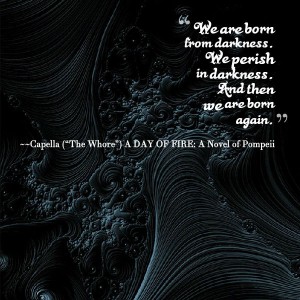 Intrigued? Mark your calendars for November 4th.  A DAY OF FIRE: A NOVEL OF POMPEII will be available in e-book and paperback.  Currently it can be pre-ordered in the e-book format.