In less than a month I will be off to the 5th North American Historical Novel Society Conference in St. Petersburg Florida, where I will be sitting on two panels—“Location, Location, Location” (discussing how setting is the mortar board upon which historical novels are built and tackling topics related to recreating period locations); and “The Feisty Heroine Sold into Marriage Who Hates Bear Baiting: Clichés in HF and How to Avoid Them” (title of this one says it all). 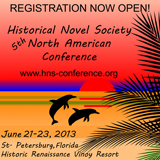 Those of you who were kicking around this then-new blog 2 years ago know what my conference attendance means. . .lots of juicy post-event blogging on trends in the genre and topics of historical fiction interest.  But why should you wait until after?  How about a conference teaser—an interview reunion with HNS panelist, Nancy Bilyeau.

Nancy is the author of a pair of marvelous historical thrillers following the adventures of novice nun, Joanna Stafford, as she seeks to survive and thrive in Henry VIII’s England while the monasteries are dissolved around her.  Nancy’s first book, The Crown, released in 2012 to immediate critical acclaim.  “O” (The Oprah Magazine) called it, “A juicy blend of lust, murder, conspiracy, and betrayal.”    Nancy’s second book, The Chalice, released this past spring to the eager embrace of existing fans and new ones alike.

Nancy last visited me immediately after the release of her debut novel.  I present for your pleasure an update to that interview.

1)     Since we last sat down together in our virtual chairs your second novel, The Chalice, came out.  Can you tell us a little bit about the new book?

In the second book, it’s 1538, and my main character, Joanna Stafford, is caught in the crosswinds of time. She is a Dominican novice without a nunnery—Henry VIII has broken with Rome, and all the monasteries have been seized. Joanna must decide what path to follow now, and while she seeks a quiet life of tapestry weaving and raising her orphaned relative, Arthur, the kingdom is far from stable. There is a conspiracy against the king, one revolving around prophecy, and Joanna is targeted by those who want Henry VIII off the throne. She learns that the prophecy is about her – and an act she must take in the future, one that could be very dark and dangerous. So the conflict of the book is: If you loved something very much and you had a chance to save it but to do so you must commit an act that is perhaps unforgivable, would you do it?

2)     inspired you to choose a fictional Dominican nun as the heroine of your series?

I first chose to set a book in the 16th century—simply because it is my favorite century from history. I love mysteries and thrillers, and wanted to attempt to write one with a female protagonist. It took me a long time to figure out who would be the person. I didn’t want a royal or lady in waiting, yet someone living in a Tudor village, I feared it would be too hard to inject that woman into conflict that rises to the level of a thriller. A nun struggling for her future in the middle of the Dissolution of the Monasteries—when the Catholic Church was being violently dismantled—could be quite compelling. Finally, I picked a Dominican because there was only one such order in England, and that made it special.

3)     I found it refreshing that Joanna stayed “in character”—true to the religious sentiments one would expect a 16th century nun to have.  How difficult was it for you to achieve that?  Do you think it was a risky choice given you are writing for a modern—and generally rather skeptical—audience?

One of my pet peeves is characters in historical novels who have modern sensibilities. It’s the easy way out. There is some strange part of my personality that compels me toward the most difficult choices. Sometimes I wish it were otherwise! But as soon as I decided on a nun, I was determined to make her authentic to the spiritual values of the period. I didn’t want to write a book with a reluctant nun who is forced into it by her father or retreats to a priory after rejection by a man. Again, that’s the easy way out. I did worry that readers would be turned off by a spiritual woman but I’ve not seen that reaction. Readers of historical fiction are eager for authentic behavior, I’m more convinced of that than ever. Commit anachronisms at your peril!

The way I tried to achieve it was reading what women in religious orders actually wrote: Catherine of Siena, Hildegarde of Bingen, Teresa of Avila. That helped get me in the proper mood. Also a writing teacher recommended I research the lives of the early female Catholic saints, the ones who were torn to pieces in the Roman Coliseum or who became martyrs in the Dark Ages and medieval period. The thinking of these women is about as far from a 21st century mindset as you can get.  Just fascinating.

4)     Besides Joanna, who is your favorite character in the series?  Who is your least favorite?  Why?

Brother Edmund is my second favorite—I like to think that he is a pretty original character and for some reason I have tremendous sympathy for him. He’s a mix of strengths and weaknesses. I tried my best to make all the characters nuanced. I don’t like two-dimensional people hurtling through thrillers. Or characters with worn-out identifying descriptions: a natural beauty, a strong-jawed man. Ugh.

My least favorite character? Hmmmm. That’s an interesting question. Did I create a character I personally would dislike? Apart from George Boleyn—and I can’t give away why I wouldn’t want to have encountered him at a tender age, or else that would be a spoiler—it would have to be the young prioress in The Crown. She was inspired by a boss I once had—a very difficult one. In fact, I drew on my personal work history, my years in the magazine business, when depicting life in the priory. I thought about it a lot, and decided that though the stereotype of a nunnery was of graceful, serene ladies floating down the halls in harmony, I imagined that there would be the rivalries and tensions found in any group of people essentially working together, and in this case living together too. I was very happy to receive an email from a Dominican nun and two emails from friars that said I captured correctly the essential feeling of life in an enclosed religious community.

5)     Truth is often stranger than fiction.  In our last talk I asked you about interesting discoveries made while researching The Crown.  When you set out to write its sequel, The Chalice, what was the most unusual or unexpected thing you discovered in that process?

I was stunned by how much belief there was in astrology, alchemy and prophecy, from the highest levels of society to the lowest. The mid-16th century was a very mystical time.

6)     Writing a series presents special challenges to an author.  What, in your opinion, is the most difficult aspect of writing sequential novels?  The most rewarding?

The most rewarding aspect is that I love my characters and I want to write them in new situations, whether it’s political crisis or romantic entanglement. I just enjoy spending my time with these people! As for the hardest, well, I am trying to write these books for someone who has never read the ones that come before and also for the fans of the series. It’s hard to serve both kinds of readers.

7)     I know you are hard at work on the final book in this series.  What will it be called and can you share a bit about it?

I’m excited to share with you that Simon & Schuster has bought the third book. It is called The Covenant. Joanna Stafford finally returns to the court of Henry VIII—and nearly pays for that decision with her life. Someone is trying to kill her and she doesn’t know who. If you’ve read the first two books, you know that there are enough people to form a line. LOL. Also, Joanna will travel outside of England, as she did in The Chalice, but farther this time. And she will make a definitive decision on how she plans to spend the rest of her life, and with whom.

8)     In The Crown  Joanna brushes elbows with a number of famous historical characters like Catherine Howard and Stephen Gardiner, Bishop of Winchester.  In The Chalice you treated us to a face-to-face encounter between Joanna and Thomas Cromwell.  Who might we meet in book three?

In The Covenant, many things are going to come to a head that I have been writing about in The Crown and The Chalice. Joanna is a weaver of tapestries and Henry VIII is the most avid collector of tapestries in Europe (that’s true!), and so she will be pulled into the court and the inner circle of the king. Catherine Howard will play a larger role in the third book, which shouldn’t surprise those knowledgeable of history, but readers will see a new side to her and also get to know a much different Thomas Culpepper than has been depicted before. Joanna will stand up to Bishop Gardiner and the duke of Norfolk in this book!  And there will be some surprises too. Just as in The Chalice I brought in a character contemporary to this time not usually associated with the Tudors, I have a plan for two other fascinating folks.

9)     Like myself, you will be a panelist at the upcoming Historical Novel Society Conference, what is the topic of your panel and what can attendees look forward to learning if they attend?

The name of the panel is “Making It in the Mainstream and What Comes After.” I am honored to be on the same panel as Patricia Bracewell, Deborah Swift, Jenny Barden and Gillian Bagwell. We’re going to talk about what brought us this far and how we plan to keep going. 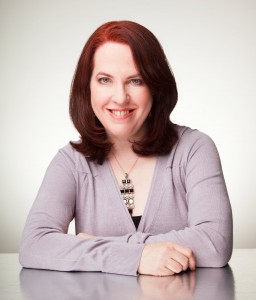 About Nancy:  Nancy Bilyeau is a writer and magazine editor who has worked on the staffs of InStyle, Rolling Stone, and Ladies’ Home Journal. She is currently the executive editor of DuJour magazine. She was born in Chicago and grew up in Michigan, earning a bachelor’s degree from the University of Michigan. Now she lives in New York City with her husband and two children. Her first novel, The Crown, was nominated for an Ellis Peters Historical Dagger Award 2012 by the Crime Writers’ Association, given to Best Historical Crime Novel.