My dear friend historical romance author Miranda Neville wrote an interesting piece at The Ballroom blog.  The gist of Miranda’s post is that writers have an incredible collection of historical real-estate to browse when creating settings for their historical novels (whether straight or romance), and at each location we can cherry-pick the very best parts and amalgamate them into something new.  For example, Miranda incorporated The Marble Saloon at Stowe into the fictional Mandeville House—setting for her just released The Amorous Education of Celia Seaton as well as two of her other romances.

Miranda’s post got me thinking about several additional points relevant to historical settings—specifically, pertaining to the use of real locations rather than locations created in the mind of the writer.

Timing is everything!  Great cities, great cathedrals, and houses (both great and not so great) change over time.  When an actual historical location is used in a novel we need to remember that—however iconic—that setting was not stagnant.  Whether you are describing the skyline of Avignon or Westminster Abbey you’d better know what period you are writing about before you begin waxing wane with descriptions.  And as a reader, you shouldn’t be too quick to expect certain locations to look certain ways (e.g., as they did when you visited, or in Aunt Irma’s postcards).

For example, Westminster Abbey is a true historic landmark.  Millions have visited it, and many more have seen it in pictures or movies.  What they’ve seen—and the images that rise to their minds when the Abbey is mentioned—is not the Abbey that existed when Eleanor of Provence was crowned Queen of England there in 1236.  In fact, Eleanor’s husband, Henry III, was responsible for a masterful renovation of the Abbey (leaving it dramatically changed for generations to admire), a reconstruction that took years.  As a result, the Abbey would have looked very different at various points in my novel, The Sister Queens. 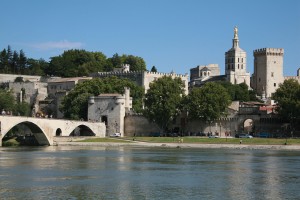 Similarly, for much of its history (and today) the outline of the city of Avignon has been distinguished by the Papal Palace (gorgeous). But at the time of my novel, when Avignon was part of the Count of Provence’s territories, the great medieval palace seen in paintings and photographs didn’t’ exist.  Describe Avignon including the palace and get it wrong.  Read expecting to see the palace and it won’t be there.  This is why it’s a darn good thing that . . . .

Historical novels are NOT guidebooks.  While it IS important not to be anachronistic when portraying settings—making certain not to include features in an exterior or interior that didn’t exist in a particular time period—it is okay not to flesh out every corner of a room or every façade of a palace.  I certainly believe that an author needs to know the world of her novel in depth in order to move her characters through it convincingly, but, unless you are describing the maneuvers of troops in a battle, sharing too much detail is unnecessary.  A little era-setting detail often goes a long way.  Readers like to use their imaginations, or at least this one does.  When an author throws in too much description just because she/he has the research to support it, or when I feel he/she is showing me miniscule detail gratuitously (the details themselves are interesting or intriguing but in no way relate to the plot), I start to skim.  Skimming is bad.

Of course there ARE occasions when an infusion of detail can enrich the reader’s experience.  This is particularly true when we want readers to share the sensory experiences of a character—a young woman overwhelmed by the view from a chateau, or nearly dizzied by the incense-saturated air and soaring voices singing the Laudes Regiae in a magnificent abbey.  Nothing can draw a reader into the emotion of a moment more effectively than the purposeful inclusion of carefully selected details of the historical setting.  But note that I said, “purposeful inclusion” and “carefully selected.”  Filtering is a must.  Try to load the same level of detail into every scene in your historical novel and you ruin the effect.

Writers can also use setting itself as catalyst to move a scene forward.  Of course on the large scale this fact is obvious—pick any scene in a historical novel and move the setting as a form of exercise (from the gardens of a grand Château to its great hall).  The meaning of and physical movements in the scene are likely to change, even if you attempt to keep the dialogue the same.  But, setting as catalyst can also occur in small subtle ways in fiction as it does in real life.  Have you ever noticed something—on your desk, outside your window—that, serendipitously, makes your mind leap to a new place and to a particular idea or to action?  That can happen to characters too.  A mother picks up a bird’s nest and thinks of her children.  The pattern in a window reminds a character of a gown and thus of a particular partner from the ball the evening before.  I find as a writer I often want, even need, to place a certain scene in a certain setting in order to take advantage of elements of the architecture or décor that I know by my research would have existed in that place at that time.

What about you?  As a writer how do you handle the REAL real-estate that makes an appearance in your work?  As a reader how much detail is enough to make you feel immersed in the past?  Where does the amount of detail cross a line, leaving you bogged down?  Do you have strong feelings about the balance between real settings/descriptions based on research and locations/rooms created in the mind of the author?