I am downsizing our gift-giving around here this year but that does NOT mean I am not buying books! SEVEN arrived this weekend alone. Some for stocking-stuffers, some to give friends who I think will enjoy them as much as I did.

In honor of CYBER MONDAY Barnes & Noble is running a 15% off your entire order promo (today only). The code is BNCYBER16 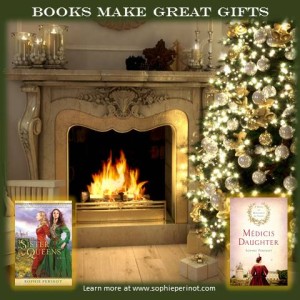 If you’d like to give a little Perinot this season, here are the brief descriptions and links for my titles at both B&N (use that coupon code!) and Amazon. Of course the novels are also available at your neighborhood bookstore!

Winter, 1564. Beautiful young Princess Margot is summoned to the court of France, where nothing is what it seems and a wrong word can lead to ruin. Known across Europe as Madame la Serpente, Margot’s intimidating mother, Queen Catherine de Médicis, is a powerful force in a country devastated by religious war. Among the crafty nobility of the royal court, Margot learns the intriguing and unspoken rules she must live by to please her poisonous family.

Eager to be an obedient daughter, Margot accepts her role as a marriage pawn, even as she is charmed by the powerful, charismatic Duc de Guise. Though Margot’s heart belongs to Guise, her hand will be offered to Henri of Navarre, a Huguenot leader and a notorious heretic looking to seal a tenuous truce. But the promised peace is a mirage: her mother’s schemes are endless, and her brothers plot vengeance in the streets of Paris. When Margot’s wedding devolves into the bloodshed of the St. Bartholomew’s Day Massacre, she will be forced to choose between her family and her soul.

Like most sisters, Marguerite and Eleanor were rivals. They were also queens.

Raised together at the 13th Century court of their father, Raymond Berenger, Count of Provence, Marguerite and Eleanor are separated by royal marriages—but never truly parted.

Patient, perfect, reticent, and used to being first, Marguerite becomes Queen of France. Her husband, Louis IX, is considered the greatest monarch of his age. But he is also a religious zealot who denies himself all pleasure—including the love and companionship his wife so desperately craves. Can Marguerite find enough of her sister’s boldness to grasp her chance for happiness in the guise of forbidden love?

Passionate, strong-willed, and stubborn, Eleanor becomes Queen of England. Her husband, Henry III, is neither as young nor as dashing as Marguerite’s. But she quickly discovers he is a very good man…and a very bad king. His failures are bitter disappointments for Eleanor, who has worked to best her elder sister since childhood. Can Eleanor stop competing with her sister and value what she has, or will she let it slip away?

A DAY OF FIRE (AMAZON)

Six authors bring to life overlapping stories of patricians and slaves, warriors and politicians, villains and heroes who cross each others’ path during Pompeii’s fiery end. But who will escape, and who will be buried for eternity?