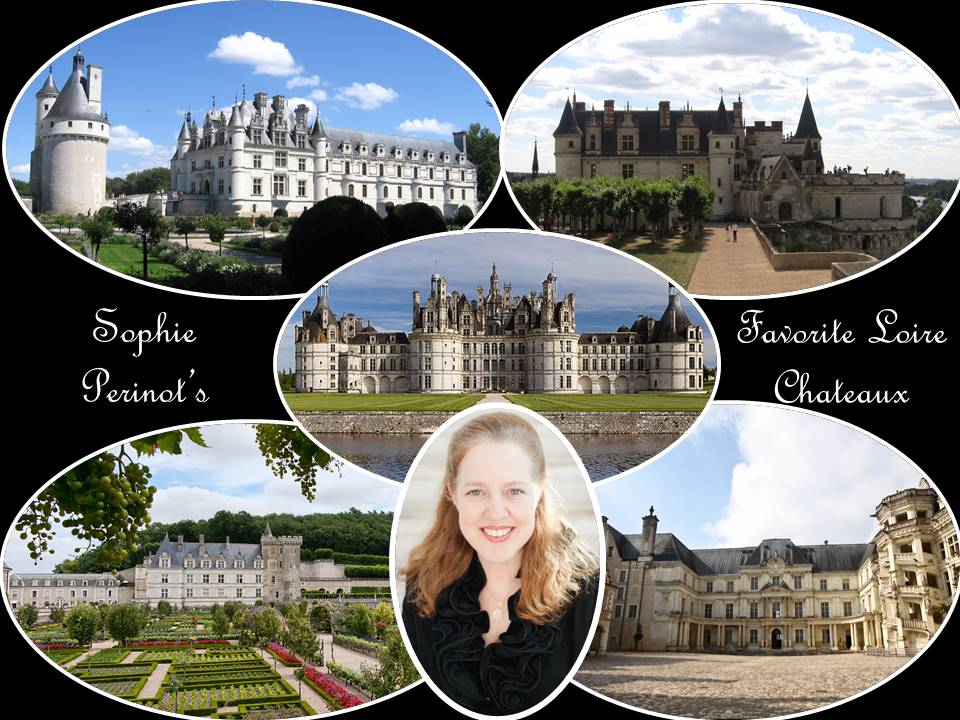 Did you know there are OVER THREE-HUNDRED Loire Valley Chateaux? Well it’s true. I am betting nobody has seen them all. I’ve been visiting the Loire since I was 20 (and we will not discuss how long ago that was). Here’s my personal TOP 10 FAVORITES list. Which ones have you been to? How would your list differ from mine?

1) CHENONCEAU: Call it a girlhood crush but Chenonceau—Chateaux of Diane de Poitier and Catherine de Médicis—will always top my list. Chenonceau is the most visited and photographed chateau in the Loire Valley. It is often described as ‘the ladies chateau’ as throughout its history a series of women had the most influence its design and its destiny. Besides the gracefully river-spanning gallery, the stunning gardens, Catherine’s bedchamber, and the fact that Valois history is everywhere, I particularly love that they preserved a portion of the severe black and white (colors of royal mourning) décor that King Henri III’s widow brought to the palace. Not going to lie though—her deep mourning always puzzled me because Henri (Catherine’s favorite son) is not one of my favorite people (or Kings). He was, however, good friends with his wife (who worshipped him), so I guess she had reason to be attached to him.

Given my long attachment to the chateau, I was BEYOND THRILLED when my publisher put Chenonceau on the cover of my book Médicis Daughter: A Novel of Marguerite de Valois !!!

Want a quick tour and history of this royal gem? I’ll hand the mic over to Rick Steves.

a) BLOIS: I love the split character of Blois. Built in stages around the main courtyard, this fabulous palace has a whopping 564 rooms (including 100 bedrooms) and 75 staircases. Francis I undertook a major renovation of Blois (do we see a pattern here? The man pretty much renovated all my favorites) at the behest of his wife who wanted them to spend more time at Blois and less at Amboise. When Queen Claude died Francis spent little time at Blois but his renovation gave the Chateau my favorite feature—the gorgeous Francis I spiral staircase. The Valois spent considerable time at Blois. Princess Marguerite’s wedding contract was signed here (as readers of Médicis Daughter will remember). When Margot’s brother, King Henri III, was eventually drive from Paris during the later period of the French Wars of Religion he and Catherine lived at Blois. The “Estates-General” were held there in 1576 and 1588. For those readers of Médicis Daughter who are firmly “Team Henri, Duc de Guise” this is the Chateau where he was assassinated by the royal bodyguard of Henri III (during the 1588 meeting of the “Estates”). Here is a link for the English version of the Chateau’s official website.

b) AMBOISE: When I found out that Princess Marguerite was sent to Amboise with her youngest brother during the first War of Religion I was thrilled! History was giving me the chance to set a scene—the opening scene as it turned out—of my Valois novel, Médicis Daughter, at one of my favorite Chateaux. Amboise is an absolute stunner as it towers, tall and white, above the charming city of Amboise. And once you wend your way up to it, the Chateau’s graceful interior and breathtaking views of the city, river and countryside beyond are unforgettable.

This is a palace chockfull of Valois history! King Charles VIII was the Valois monarch who spent the most time at Amboise living there daily with his wife, Anne of Brittany, until his untimely death (he left a tennis match and managed to hit his head on a door lintel, fell unconscious and died—talk about bad luck). King Francis I grew up here and later refurbished a wing in glorious renaissance style (look for his Salamander symbol). Henri II actually constructed a wing parallel to the one his father renovated—though sadly it does not exist today. He and his Queen, Catherine de Médicis, spent considerable time at Amboise.

Finally if you are fan of the short-lived King Francis II (possibly thanks to the TV series Reign) Amboise has a place in his history as well. In 1560 the 16 year old Francis was the target of an attempted kidnapping. French Protestants (allied with the Prince of Condé) felt the young King was being unduly influenced by his wife—Mary Stuart, Queen of Scotland’s—uncles, the powerful Guises. This influence was leading to the repression and persecution of France’s growing number of Protestants. In March a band of Protestants tried to remove François II from the influence of the Guises by whisking him away from the Château d’Amboise. The conspirators were caught, and quickly executed—their bodies hanged from the balcony of Chateaux Amboise as a warning to others. Perhaps not surprisingly, Chateau Amboise fell out of royal favor after this incident.

This is the link for the Chateau’s English website.

4) CHAMBORD: Big, bold and beautiful! If you like more of everything than you are going to love Chambord with its 365 fireplaces (one for every day of the year) and its Leonardo da Vinci designed double spiral staircase (the two spirals climb the three floors without ever meeting, preserving the privacy of those using one from those using the other). This big-boy was begun—but never finished despite 28 years of construction—by King Francis I as a hunting lodge. His salamander emblem and the motto: ” Nutrisco et Extinguo” (until it fills the whole world) are seen many times in the Chateau. You can also find his son King Henri II’s mark—just look for the motto “Nec pluribus impar” (alone against all). The massive château is composed of a central keep with four immense towers at the corners, all very prettily reflected in a decorative moat (defensive moats being “so very medieval” aka yesterday). And because the motto of this place is clearly “big is better” it sits on over 12,000 acres.

The Chateau has a gorgeous website. Check it out!

5) VILLANDRY: Go for the beautiful formal gardens, they are magical. The current Chateau was built in the 16th century by Jean Le Breton, France’s Controller-General for War under King Francis I. It remained in the Breton family for more than 200 years. Villandry is not a royal Chateau but certainly worthy of royalty.

6) CHINON: This tribute to the middle-ages, built from the 12th century on a rocky outcrop above the Vienne River, is closely associated with French history from the 12th to the 15th centuries. This is where Joan of Arc claimed to have heard heavenly voices when she met the French King. Really more of a Hundred Years War era Chateau (not that there is anything wrong with that!) there is no Valois connection to Chinon except for the fact that at the very start of the French Wars of Religion (1562) Chinon was briefly in the hands of Protestant forces.

7) AZAY-LE-RIDEAU: Considered one of the foremost examples of early French renaissance architecture and set on a picturesque island in the middle of the Indre river, is it any wonder Azey-le-Rideau is one of the most visited of the Loire Chateaux? Although you will find the salamander and ermine of Francis I and his wife, Claude of France, carved into the architecture here, this was never a royal chateau (the nobleman who built it merely included the royal devices to honor his monarch—clever man).

8) SULLY-SUR-LOIRE: Clearly I have a thing going for some of the Protestant gentlemen who served King Henri IV of France (the first Bourbon King). This equally powerful and beautiful collection of white towers ringed and reflected in water is one of two Chateaux that make my favorites list as a result of their owners (see also Saumur). Sully-sur-Loire was constructed in the 15th century and was intended as both a fortification to defend a nearby bridge over the Loire River and a luxury residence. I visited the castle primarily because it was purchased in 1602 by Maximilien de Béthune, Duc de Sully. Maximilien was extraordinary. As a young man he escaped the St. Bartholomew’s Day Massacre by his wits and subsequently presented himself to fellow survivor King Henri of Navarre. From that time on he and the King of Navarre were close. When Henri ascended to the French throne as Henri IV of France Maximilien was the King’s Superintendent of Finance helping to bring order and stability to a French economy blighted by years of religious war. The Duc made substantial changes to Sully-sur-Loire and it remained in his family until 1962. Maximilien’s tenure is still evident in the structure and, as my children can attest and much to their eternal embarrassment, I broke down in tears when I found his decorative initials incorporated in the dining room décor.

9) SAUMUR: overlooking the confluence of the Loire and the Thouet Rivers this striking Chateau was built in the 10th century making it one of France’s oldest castles. Saumur (as it looked in 1410 when it was home to the Duc d’Anjou) was depicted in the Très Riches Heures du Duc de Berry. I have a massive crush on the nobleman that King Henri IV (“the Great”) of France gave Saumur to in 1589— Philippe de Mornay, the seigneur du Plessis Marly, often called “The Protestant Pope”—but more about that another time 😉

10) CHEVERNY: because everything can be about the medieval and renaissance ( I KNOW, I know, it is surprising to hear me say so). Variety is the spice of life! Cheverny is pure 17th century—very Louis XIII style with its emphasis on symmetry. The fact that is remained largely as it was built may have a lot to do with the fact that the Hurault family has owned Cheverny for 6 centuries—clearly they are a family that values tradition.