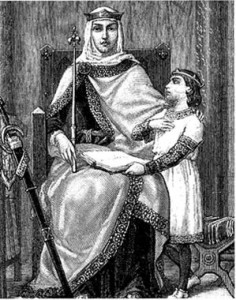 I won’t keep you in suspense; quotes from these authors embody guiding principals of my life.  I share them (along with several other favorite quotes)  in an interview at Layered Pages today.  I also discuss why I find Louis IX of France even less likeable than his harridan of a mother, Blanch of Castile.  Please stop by, Stephanie asked some excellent questions!

January 31, 1246 – On this day (and as a result of the earlier secret conclave at Cluny) Beatrice, Countess of Provence, marries Charles d’Anjou, brother of Louis IX at Aix in Provence.

A list of “medieval celebrities” are present at the marriage, including: the bride’s sister Marguerite (Queen of France) and her husband Louis IX; Blanche of Castile, Dowager Queen of France;  the Dowager Countess Beatrice of Provence; and the bride’s prestigious Savoyard Uncles (Thomas and Count Amadeus IV).  When the groom complains noisily that the event lacks sufficient  grandeur (he had expected a magnificent affair in Sens or Paris),  Marguerite is NOT amused.  Eleanor of Provence will learn of her sister’s marriage into the Capetian line only after-the-fact,  and she will be furious.