Today is the 5th anniversary of the release of my debut novel, The Sister Queens! 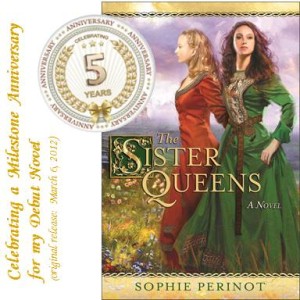 Over the past 5 years, YOU, THE READERS, have shown the novel a lot of love! You’ve also given is some great reviews—80% of Amazon reviewers have awarded The Sister Queens a 4-star or 5-star rating—reviews like like this:

THE SISTER QUEENS is historic fiction at its absolute finest. . . . In all of its colorful prose, deep and eccentric characters, and historical brilliance, this book can be summed up with one word: phenomenal. Brava!

At it’s core, THE SISTER QUEENS is a book about sisterhood—specifically the bond between Marguerite and Eleanor of Provence. . .

Raised together at the 13th Century court of their father, Raymond Berenger, Count of Provence, Marguerite and Eleanor are separated by royal marriages—but never truly parted.

Patient, perfect, reticent, and used to being first, Marguerite becomes Queen of France. Her husband, Louis IX, is considered the greatest monarch of his age. But he is also a religious zealot who denies himself all pleasure—including the love and companionship his wife so desperately craves. Can Marguerite find enough of her sister’s boldness to grasp her chance for happiness in the guise of forbidden love?

Passionate, strong-willed, and stubborn, Eleanor becomes Queen of England. Her husband, Henry III, is neither as young nor as dashing as Marguerite’s. But she quickly discovers he is a very good man…and a very bad king. His failures are bitter disappointments for Eleanor, who has worked to best her elder sister since childhood. Can Eleanor stop competing with her sister and value what she has, or will she let it slip away?”

On this special anniversary I hope that all of my readers know how much it means to me that you took Marguerite and Eleanor to your hearts. Thank you, from the bottom of mine!

To celebrate the day in grand style I am offering a Sister Queens GIVEAWAY–Five (5) copies of the book (one each to 5 separate winners). See the rafflecopter below to enterm and perhaps share the giveaway with a friend or two who have yet to make the acquaintance of Eleanor and Marguerite.