Whatever our personal relationship with our sisters one thing cannot be denied – they have shaped who we are.  They have given us a personality trait, an ambition, a talent, a tolerance that we would not have had but for knowing them.  They have given us a “gift”—even if, in some cases, at the time it was bestowed that gift may have seemed a burden not a blessing.

Next week I want to hear from you about the gifts your sisters have given you.  And, to encourage you to share (while celebrating the one-month-to-release mark for my novel), there will be giveaway involved. 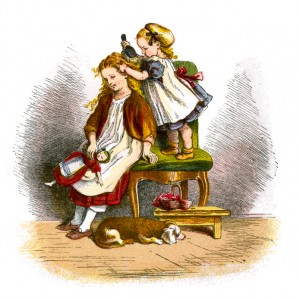 But today I want to write about one of the gifts my sister gave me.  My sister gave me this writing career.  Yes, I know that with my debut novel just about to hit shelves it is a tad premature to declare that I have a “C”areer in writing.  Forgive me that for the moment.  What I am trying to say is my sister gave me permission to be a writer.  More than that she gave me a push.

Once upon a time I was a lawyer—an antitrust litigator to be precise, not that it matters really.  I’d wanted to be a lawyer since I was a little girl.  Dream realized (check).  I should have been happy.  I wasn’t.  I was casting about for something to be next.  Asking a question I hadn’t asked in a very long time, “what do I want to be when I grow up.”  I think that’s a much tougher question when you already ARE grown up.  So much of who you think you are is wrapped up in your professional success.  The idea of making a change is scary.  Major anxiety. Major.  I can’t do major anxiety without my sister.  I am betting over the years there have been times she has fervently wished that I could.  But if I am going to obsess, stress out, or break down I am going to call my sister.  Doubtless this particular existential crisis involved multiple calls (my sister really should have been getting combat pay), but I remember THE call.

“Writer” wasn’t on the table for “next job” consideration.  But what is or isn’t “on the table” doesn’t stop my sister (and I am betting it doesn’t stop yours either)  Sisters speak wisdom unexpectedly.

“I know you are making up a story right now in your head,” my sister said.  She was right of course and, because she knows me better than anyone, better than I know myself, I didn’t deny it.  “Whatever that story is,” she said, “pick up your dictaphone and start saying it out loud.”

My husband, children and I were leaving on a beach vacation, I took my dictaphone with me like my sister told me to.  I dictated scenes at the seaside.  Later, at home, I used the voice-activated feature to dictate while I washed floors.  Most infamously (at least in my family) I dictated a scene in the frozen food section of my local grocery store while a clerk looked suspiciously on (industrial spy anyone?).  The book that resulted from my sister’s words snagged my agent.  My agent found me my audience.

My sister was uniquely qualified to give me this gift (and my life as a writer is one of the greatest dream-come-true gifts of my life).  She knew I was a storyteller.  She’s a large part of the reason I became one.  As children we had a forty-five-minute walk to school (yes, one way but NOT uphill both ways).  I filled that time by weaving “continuing sagas” (the more sensational the better, I fear) for my travel companions.  I still remember a sci-fi tale of a color coded world, but the salient point here is that my sister alone (discounting our walking companions who went on to lives and places unknown) was privy to this side of me.  In school (high school and college) I was known as more of an essayist – and occasionally a poet – NOT one of those people who constantly wrote fiction and squirreled it away.  As I went on to be a mild-mannered (ha) lawyer nobody around me knew about the “other” Sophie.  I, myself, may even have temporarily forgotten my passion for storytelling.  But a sister never forgets.

So thank you sis.  In case I haven’t said it before, in case the dedication in my book didn’t make it clear—I owe you one.  A big one.