The first mention of a match between Marguerite de Valois and Dom Sebastian, King of Portugal, dates back to the reign of Francis II, when the French Ambassador at Lisbon sent Dom Sebastian a portrait of the young Margot.  Nothing came of those efforts though and other grooms—as readers of Médicis Daughter know—were subsequently proposed for the youngest Valois Princess.

In July of 1569, however, SERIOUS negotiations re-opened for a marriage between Margot and the young (17) king of Portugal.  Fourquevaux (the French Ambassador in Spain) received necessary powers conclude a treaty with Philip II (the King of Portugal’s Uncle) who exercised a protectorate of sorts over his nephew’s kingdom. 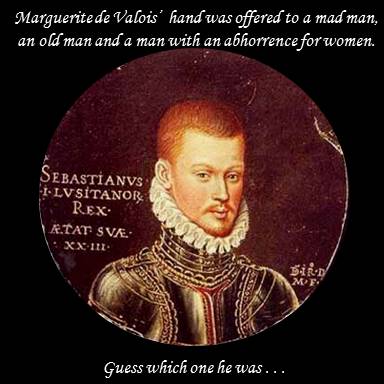 Unfortunately for Margot, like some of her previous prospective grooms, the Portuguese King, while undeniably handsome and powerful, appears to have been seriously flawed. In the first instance he had been reared by a pair of monks who appear to have made him into a serious misogynist. Additionally, Catherine’s ambassadors quickly informed her her that doctors seemed to believe the young man would not live long and that there is some question as to “whether he was ‘of any use to have children.”

None of this dissuaded Catherine de Médicis from pursuing the match however because . . . well . . . there was that power thing.

At first Spanish king also seemed disposed towards the marriage and Pope Pius V was very happy with the idea (as he desired to see a stronger union between the Catholic powers so they could battle the Turks AND the Protestant powers together).  The Dowager Queen of Portugal, however, had a preference for marrying her son to an Austrian Archduchess.

Ultimately Dom Sebastian didn’t live long enough to marry anyone and Margot ended up with a groom even less to her liking.